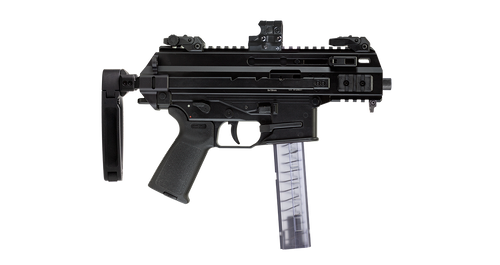 The Advanced Police Carbine (APC) was initially developed in regards to high standards of police and military units who needed a weapon with more firepower than a handgun but less length than a rifle. The result was a highly compact, highly concealable weapon capable of accurate and substantial volumes of fire. For these reasons, the US Army officially adopted it as part of the “sub compact weapon” program. The goal of this program was to provide better security to VIPs by giving their security details a weapon with more firepower than a pistol in a concealable package.

The APC9K PRO itself is a semiautomatic, blowback operated pistol chambered in 9mm. Many aspects of the weapon are reminiscent of the AR-15, such as the ambidextrous selector switch, the ergonomics, trigger assembly and accepts AR-15 style grips. These similarities make for a better shooting experience for someone already acquainted with the AR-15. The APC9K PRO also features a 5.5 inch threaded barrel with 1/2 x 28 inch threads and a 3-lug suppressor adapter, allowing for the addition of suppressors and muzzle devices. The charging handle is foldable, which gives the APC9K PRO a minimal chance of snagging and the bolt itself locks open on an empty magazine to ensure incredibly fact reload speeds. The APC9K PRO is highly customizable with optics, lights, lasers and grips with top mounted and side mounted Picatinny rails. This package comes with a ready-to-install Aimpoint Nano Optic on a low mount riser. This red dot sight is the smallest, most compact red dot sight produced by Aimpoint and only exclusively sold in conjunction with B&T firearms. The set includes a Co-Branded Microtech/B&T Dirac Automatic, an extremely ergonomic sliding knife with a matching serial number. The weapon, magazines and optic all come in a custom made, Pelican 1600 Series Protector Case with precut foam.