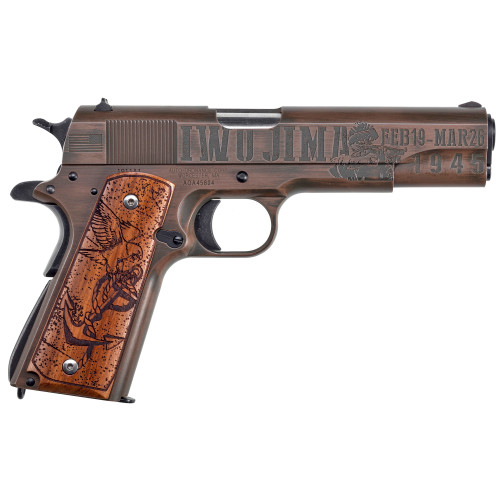 The Iwo Jima 1911 is custom engraved by Outlaw Ordnance on the left side with battle scenes, and the official name for the action: Operation Detachment. The grips feature Admiral Chester Nimitz's famous quote, Among the men who fought on Iwo Jima, uncommon valor was a common virtue; along with a depiction of the famous flag raising on Mount Suribachi. The right side also features a battle scene, the dates of the operation, Iwo Jima, and an advancing American flag. The grip depicts an eagle and anchor. The finish is a Cerakote OD Green with distressed Copper color. Each Iwo Jima 1911 starts as an all steel, Auto-Ordnance GI model 1911, made entirely in the United States. The caliber is .45 ACP, with a 5" barrel, and one seven round magazine.